Sometimes interesting information comes along when you're researching something entirely different.  Take this unusual four-shaft weave, for example; I found it in an article on printed fustians. Even though the weave in and of itself isn't "complex," it formed the ground for two surprisingly elaborate late medieval printed textiles dated about 40 years apart.  Further, it represents the industrial use of a weave structure that I thought should be added to the knowledge pool of medieval four-shaft weaves.

Fustian is the English equivalent of "fustagnano," a medieval Italian term for a class of mixed-fiber products.  They were most typically woven on a linen warp with a cotton weft.  By the 12th century, the Italian cotton industry was cranking out a wide variety of these mixed-fiber textiles for the domestic market; for example, Perugian wares were commonly fustians.  Some types of fustians were brushed and napped, giving a texture like that of "brushed denim."  In the 15th and 16th centuries, fustians became popular all over Europe as linings for elaborate garments; many examples survive from the Elizabethan period as various types of domestic textile, e.g., hangings, bed linens, and the like.  They were also used by the middle classes as outerwear.

The two textiles printed over this unusual weave are pieces from the Victoria and Albert Museum:  V&A 1478-1899, a chasuble dating to around 1490, and V&A T280-1916, a fragment dating to around 1530.  Milton Sonday made the technical assessment and analyzed the weave structure of these two textiles.  The warp is Z-spun linen, the weft S-spun cotton, and the thread count is 24x24 threads/cm.  The structure is an irregular weft-faced twill with floats spanning two, three, and four warps.  No wales are evident.  Sonday likens the structure to that of satinette (Mitchell and Sonday, 109).

I have re-drafted Sonday's analysis into something a little more familiar to handweavers while preserving the same interlacement.  See the draft for V&A 1478-1899 below. 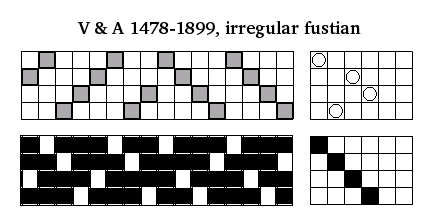 This article was originally published in Issue 37 (September 2003) of Medieval Textiles, the newsletter of the medieval textiles study group of Complex Weavers.  The draft and drawdown I submitted were created using the freeware drafting program, WinWeave.  All my drafts were translated into better software for printing and publishing.   Using GIMP, I have re-edited my original draft into a graphic for inclusion here.
Posted by Carolyn Priest-Dorman at 2/21/2015 09:53:00 PM