[This article was originally published in Issue 30 (December 2001) of Medieval Textiles, the newsletter of the medieval textiles study group of Complex Weavers.]


© Carolyn Priest-Dorman, 2001
While the most common linen product in the Middle Ages was tabby-woven, weavers also produced many types of figured linens.  The rippenköper and Wabengewebe described in previous articles represent some early medieval examples.  This article expands the scope of medieval cultures and techniques producing simple figured linen weaves.

The interlacements presented here are both like and yet unlike modern linen weaves, and they can be woven on four to eight shafts.  (A future article will address some more complex multishaft linen weaves.)  All drafts were produced by the present author from drawdowns by the authors noted in the text.

Based on the available textile evidence, a variety of looms created medieval figured linens.  Some were likely produced on upright looms using several shafts.  Others could have been produced on horizontal looms with a number of shafts that lifted by hand rather than with treadles, the so-called métier aux baguettes.  Yet others came from treadle looms.  A fifteenth century Italian miniature depicts a woman weaving at a six-shaft counterbalance loom, just right for weaving "Perugia towels" and similar six-shaft linen weaves (Cardon, Fig. 127, p. 316).

Huck- or barleycorn-type weaves existed fairly early.  Number 7409 from the Vatican's Pfister collection is a Coptic linen with alternating groups of three long floats in warp and weft on a tabby background.  Although it only requires three shafts to weave, it has a lot of textural impact. 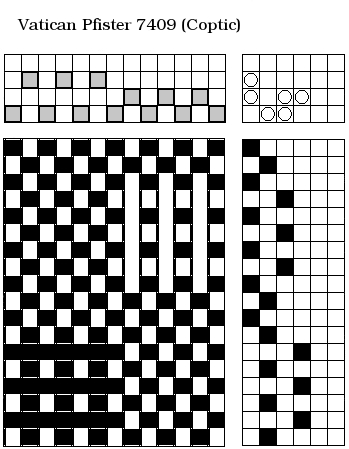 A later relative of this weave, the "Sluier van Maria" (Mary's Veil), dates to the eleventh or twelfth century.  This linen relic, now residing at Tongeren in Belgium, is a four-shaft weave; it alternates rows of paired weft floats with rows of paired warp floats (De Jonghe 1988, pp. 65-66). 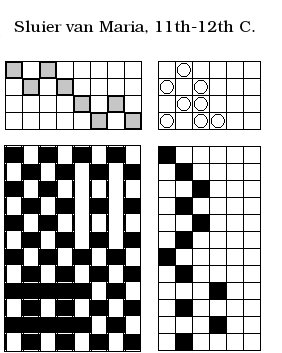 Goose-eye twills, featuring concentric lozenges with point repeat, became widely popular for linens in the Middle Ages, especially those executed on more than four shafts.  A prime example is the so-called Perugia towels, a class of Italian tablewares with brocaded borders in a contrasting color.  Many of these were woven with grounds in six-shaft lozenge twill; the aesthetics of this product entered the European folk tradition and survive to this day in some weavings of south central Europe (Endrei, p. 67).  A number of these elegant pieces, or at least their brocaded sections, survive in museum collections, often in shapes and sizes that match depictions of tablecloths and serving towels in medieval depictions.

A number of fragmentary, yet unornamented, similar textiles are preserved in treasuries all over Europe.  One such six-shaft weave, T-27, comes from the Museo Sacro collection at the Vatican.  Dated simply as "medieval," it is in a 3/3 point repeat lozenge twill (see draft, based on Volbach's drawdown). 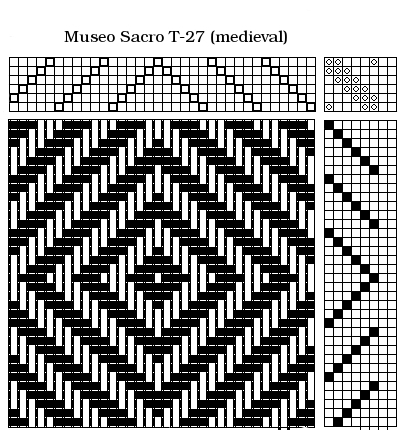 Some of the extant pieces in this style display significant threading, treadling, and/or tie-up errors.  Among them are an ecclesiastical hood liner from the Benedictine convent at Engelberg, Switzerland (Schmedding, p. 129f); a relic wrapping from the cathedral at Tongeren, Belgium (De Jonghe 1989, p. 240); and the relic from Gruuthuuse, Bruges (De Jonghe 1989, p. 234).

Lastly, what would a consideration of medieval linen weaves be without reference to a famous shroud?  The shroud of St. Bernard of Clairvaux (dating to the mid-twelfth century) exhibits several interesting features, not least of which is its complete lack of linen fiber.  An eight-shaft weave, it alternates narrow warp-faced twill cords with areas of tabby lozenges outlined in weft floats (see draft below, based on Moore's drawdown). 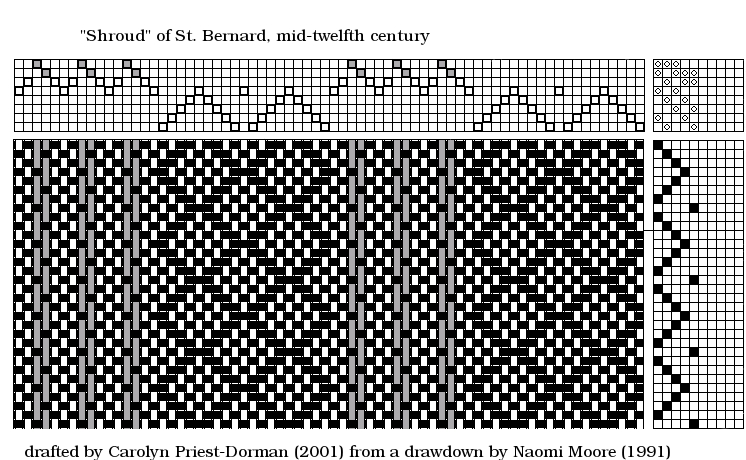 
Note:  The author is preparing a web page bibliography of reference materials on the Perugia towel.

This article was originally published in Issue 30 (December 2001) of Medieval Textiles, the newsletter of the medieval textiles study group of Complex Weavers.  The draft and drawdown I submitted were created using the freeware drafting program, WinWeave.  All my drafts were translated into better software for printing and publishing.  During that process, the draft and drawdown for the Shroud of St. Bernard were incorrectly augmented to include not three ribs per repeat, but four.

To complicate matters further, the original article was subsequently picked for inclusion in Complex Weavers Journal 69 (May 2002), pp. 32-33.  The version in Complex Weavers Journal corrected the first error but introduced a different one during the republishing process.  While the drawdown for the textile was correct, the draft was not.  The draft was incorrectly truncated, leaving out half of each section of liseré lozenges.

I wanted to put a completely correct version of the shroud draft out there with this reprint.  WinWeave was a great tool for weavers in its day, especially during the design process, but it doesn't create great output.  Using GIMP, I have re-edited each of my original drafts into a graphic for inclusion here.  In particular, I have ensured that the draft of the shroud textile include two complete threading repeats in order to reduce confusion.  It is as correct and complete as I can make it.  Toward that end, here also is a photo I took of the sample I wove to scale using Roumanian hemp singles in the warp, coarse cotton singles in the weft, and my own (very badly) hand-spun fat cotton singles in the warp ribs.