This article presents some multishaft self-patterned linen weaves that are a bit more complex than those of previous articles.  The interlacements can be woven on seven to 15 shafts.  All drafts were produced by the present author; with the exception of "Pavy 8," which is original, they were developed from drawdowns by the authors noted in the text.

Two basic classes of weave structure are represented by these more complex textiles.  Like some of the simpler self-patterned weaves, they share two basic principles.  First, they are self-patterned, with a single warp system and a single weft system.  Second, they display regularly repeating areas of different length floats in the same textile.

The first class has areas of twill floating in both systems on both faces.  Beyond "twill," this class of structure does not seem to have a specific name, although many of the weaves represented qualify as composite twills in CIETA terminology (Burnham, p. 29).  Many variants appear in Davison's chapter on "twill combinations," mostly based around the point repeat lozenge twill and the gebrochene, or "Ms and Ws," twill.

The point repeat lozenge twills covered in the previous article have some more complex cousins.  The Vatican's T-5, from the Museo Sacro collection, is a particularly attractive example (see draft).  This 13-shaft linen is of unknown medieval date (Volbach, pp. 16-17).  Its thread count is unavailable; however, Volbach's drawdown suggests the original proportions of the sett, four warps for every three wefts, yielding a lovely network of elongated twill lozenges filled with tabby. 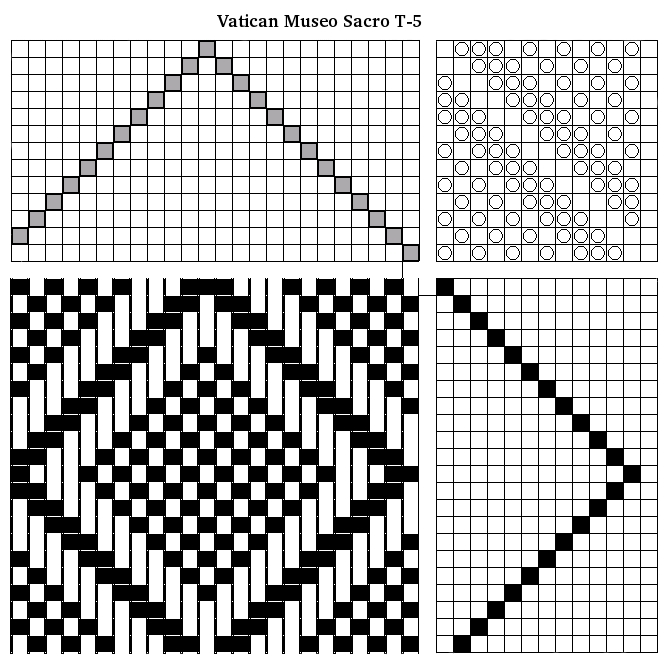 Another example is the "bloeddoek" (cup cover?) at Hoogstraten in Belgium, which dates to the last quarter of the 14th century (De Jonghe, p. 66).  Although De Jonghe analyzed it as a 16-shaft weave, if his drawdown is correct it can be woven on 15 shafts and 15 treadles (see draft).  The twill sections involve floats over three threads.  De Jonghe's drawdown notes a shedding anomaly in the original that results from one tie-up having been omitted; whether error or intention is unknown.  The draft below preserves the original error, but adding Shaft 5 to Treadle 9 in the draft will perfect the shedding. 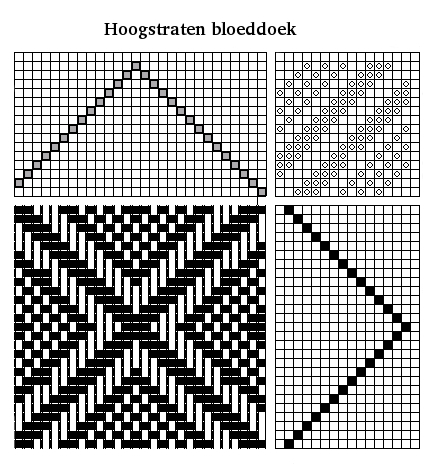 The second type of weave structure to be considered here is one with twill floats of varying length in only one system per side of the textile.  Specifically, these textiles have only weft floats on the face of the textile, against a foundation of tabby.   The appropriate CIETA terminology to apply to these textiles is liseré weaves (Burnham, p. 86).  The effect is similar to a brocade, except that the floats do not derive from a supplemental weft.  Many medieval linen or silk liseré textiles are quite elaborate, woven on various types of drawlooms.  The one presented here, the linen chasuble from the Church of St. Godehard, is simple enough to be woven on a 16-shaft loom (see draft).

This 14th century liseré textile, preserved at Hildesheim in Germany, exhibits a marvelous pattern reminiscent of tiled floors.  As far back as 1682, this particular pattern was being called "pavy" (Six, p. 110),  no doubt from the French pavé, or paving stone; the term may be somewhat older.  Pavy patterning can also be woven as a class of gebrochene twill.  Patricia Hilts' section on gebrochene weaves from the introduction of her The Weavers Art Revealed devotes some discussion to the development and augmention of just such a pattern.  However, a liseré pavy weave lacks the floats in the warp system that are characteristic of gebrochene pavy weaves.

The St. Godehard linen is woven on14 shafts (De Jonghe, p. 66), and the twill areas involve floats over four warps.  It was woven at about 80 ends and picks per inch, with a weft thread slightly thicker than the warp thread (Flury-Lemberg, p. 500).  I have drafted it from Flury-Lemberg's drawdown using a standard gebrochene threading and treadling.

The pavy liseré weave evidently even crossed over from the linen industry into the German fustian industry.  One 10-shaft pavy liseré from the 15th or 16th century (Endrei, p. 61), Cologne Z 1020, has a linen warp and a cotton weft (von Stromer, p. 121).  For all we know currently, other examples of fustian in this weave may also exist.  There are certainly other known examples of pre-1600 pavy weaves; however, they are not as accessible or well published as the ones in this article.  It is therefore difficult to know whether they are liseré pavys or gebrochene pavys.

Using the basic design principles of the pavy pattern, I attempted to devise a pavy liseré draft for only eight shafts.  I did not succeed with any number of shafts fewer than eight.

The eight-shaft draft presented here (Pavy 8) preserves the proportions of all its constituent lozenges as well as the symmetrical arrangement of all the pattern lines, which is not always easy with this pattern.  However, due to the comparatively small number of shafts involved, the floats are relatively short.  Accordingly, the contrast between long floats and areas of tabby is not as great as it would be on a textile woven with more shafts.  For best effect, pavy liseré needs to be woven on more than 8 shafts.

Flury-Lemberg, Mechthild.  Textile Conservation and Research: A Documentation of the Textile Department on the Occasion of the Twentieth Anniversary of the Abegg Foundation. Schriften der Abegg-Stiftung, Volume VII. Bern:  Abegg-Stiftung, 1988.

This article was originally published in Issue 31 (March 2002) of Medieval Textiles, the newsletter of the medieval textiles study group of Complex Weavers.  The draft and drawdown I submitted were created using the freeware drafting program, WinWeave.  All my drafts were translated into better software for printing and publishing.  During that process the draft I created for the "bloeddoek," which specifically preserved the original shedding error Daniël de Jonghe noted in the original, was changed by the editor to correct the error.  The draft for the Godehard textile was truncated down to a quarter of its original threading and treadling, turning it from a gebrochene into a much simpler hin und wieder (point repeat lozenge) structure.

Using GIMP, I have re-edited each of my original drafts into a graphic for inclusion here.  The draft for the "bloeddoek" that appears here is the draft I intended to be published with the article, not the corrected draft which was published.  The draft for the Godehard textile shows the complete gebrochene threading and treadling repeat; due to the size of the draft, the rising shed indicators in the tie-up have been changed to black squares in order to make them more visible.