The "kreuzköper," or "cross twill," is often called a "broken twill" in English.  It is identical to Marguerite Porter Davison's "Halvorsen #5 Pebble Weave," treadling VII (Davison, p. 5).  In north Europe, during the centuries leading up to the Norman Conquest, such weaves were executed in singles wool threads at medium to coarse setts and served as blankets, cloaks, outer clothing, and the like. 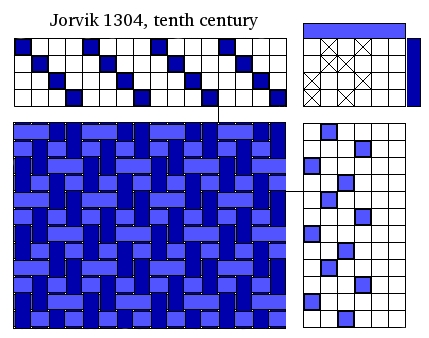 This particular draft is taken from Jorvík 1304, a mid-tenth century textile found at the Coppergate site in York, England.  The count is 10 Z-spun by 8 S-spun threads per centimeter, and the thread size is 0.8mm throughout (Walton, p. 435).

Examples from Middelburg and Elisenhof (north Germany) during the early Viking Age parallel the later London and York ones and are sometimes a bit finer (Hägg, p. 243).  An Austrian kreuzköper of roughly contemporary date has paired Z-spun warps and S-spun weft.  The warp count is 17, the weft 8 (Bender Jørgensen, p. 112). If the weft were twice the size of the warp (not an uncommon occurrence in pre-Conquest textiles), this would lead to an interesting evenweave effect.

A ninth-century example from a woman's grave at the trading city of Birka (Sweden) was heavily fulled, partially obscuring the weave structure.  The thread count is 16Zx11S/cm; the warp is firmly spun and the weft loosely spun (Geijer, p. 39).

A surprising 5.9% of the Viking Age textile finds from the harbor town of Haithabu (north Germany) were woven in kreuzköper (Bender Jørgensen, p. 79).  They were fragments of heavy outerwear--vests and coats. Thread sizes ranged from 0.7mm to 4.25mm in diameter, with thread counts varying from 3 to 11.5/cm.  Unlike the York and London examples, these were not typically evenweaves; ratio of warp to weft could be as disparate as 4:1 (Hägg, pp. 242).

Two later examples from Göttingen, Germany, date to the 13th or 14th century; no thread counts are available (Tidow, pp. 203-4).

Walton, Penelope. Textiles, Cordage and Raw Fibre from 16-22 Coppergate. The Archaeology of York, Volume 17, Fascicule 5. York: York Archaeological Trust and the Council for British Archaeology, 1989.  [Now available from Pangur Press at this link.]

This article was originally published in Issue 24 (June 2000) of Medieval Textiles, the newsletter of the medieval textiles study group of Complex Weavers.  The draft and drawdown I submitted were created using the freeware drafting program, WinWeave.  Using GIMP, I have turned the original draft into a graphic for republishing here.

An important additional array of wool kreuzköper textiles was found in the Oseberg ship burial.  (Ingstad, pp. 202-203, 390).  Ingstad calls them korskypert, which is translated "broken twill."  Many were fine, but one was apparently blanket weight, which is a perfect use for this nubbly structure.

The draft for this one was one of the earliest I made on WinWeave.  I was still in the "very confused" stage of both treadle loom weaving and using weaving software.  Accordingly, I drafted this one in two different colors in order to help me learn both the structure and the program I was using to draw the structure.  Playing with it for republishing here showed me that there's no less confusing way to draft this one so that it also looks good, so I'm leaving it two-tone.  That doesn't mean the historic ones are two-tone; to the best of my knowledge none of them are.  But this approach does make the draft easier on the eyes.  Also, on a personal note:  I like to set up my treadles so I can walk them (as much as the pattern will let me) by alternating my two feet.  If my tie-up looks weird to you, that's why.