The ordinances of the London Guild of Weavers name several different linen products in their price list of 1456: linen cloth, plain towel, napery and towels of Paris work, "crosse werk," cross diamond, small knots, chains in work, "catrylettes," "damask knots with the chapelettes," and "all manner work made in draught work" (Consitt, pp. 205-207).  Many of these apparently were figured weaves.  While researching pavy weaves, I encountered a class of Renaissance linen patterning called in Dutch kruiswerk, or cross work.  Since cross work is listed as a 15th century weave in the London list, it drew my eye immediately.

J. Six's article mentions or shows photos of several kruiswerk examples, although none of them are dated to earlier than around 1600.  Kruiswerk is a subset of the gebrochene class of weaves, an elaboration of pavy in which certain design elements are stretched out by adding stairsteps to the typical Ms and Ws threading.  Unlike the pavy liseré weaves from the last article, they have twill floats of varying length in both systems on both faces of the textile.  The historic examples all require more than four shafts to weave.

None of the 17th and 18th century gebrochene variants in Zeigler or Lumscher look quite like kruiswerk; most of them are closer to pavy in style.  Marjie Thompson published the draft of an early 17th century kruiswerk, the "Earl of Mar canvas," in 1997.  However, late last spring I encountered an even earlier example, a textile dating to around the 15th century, Tx 60, documented among the holdings of the Abbey of St. Truiden in Belgium.  It is in the same pattern family as Six's kruiswerk examples and the Earl of Mar piece.

Here is a draft of Tx 60 from St. Truiden.  Daniël de Jonghe analyzed the weave and produced a draft which I have simply redrafted into a more standardized American notation. 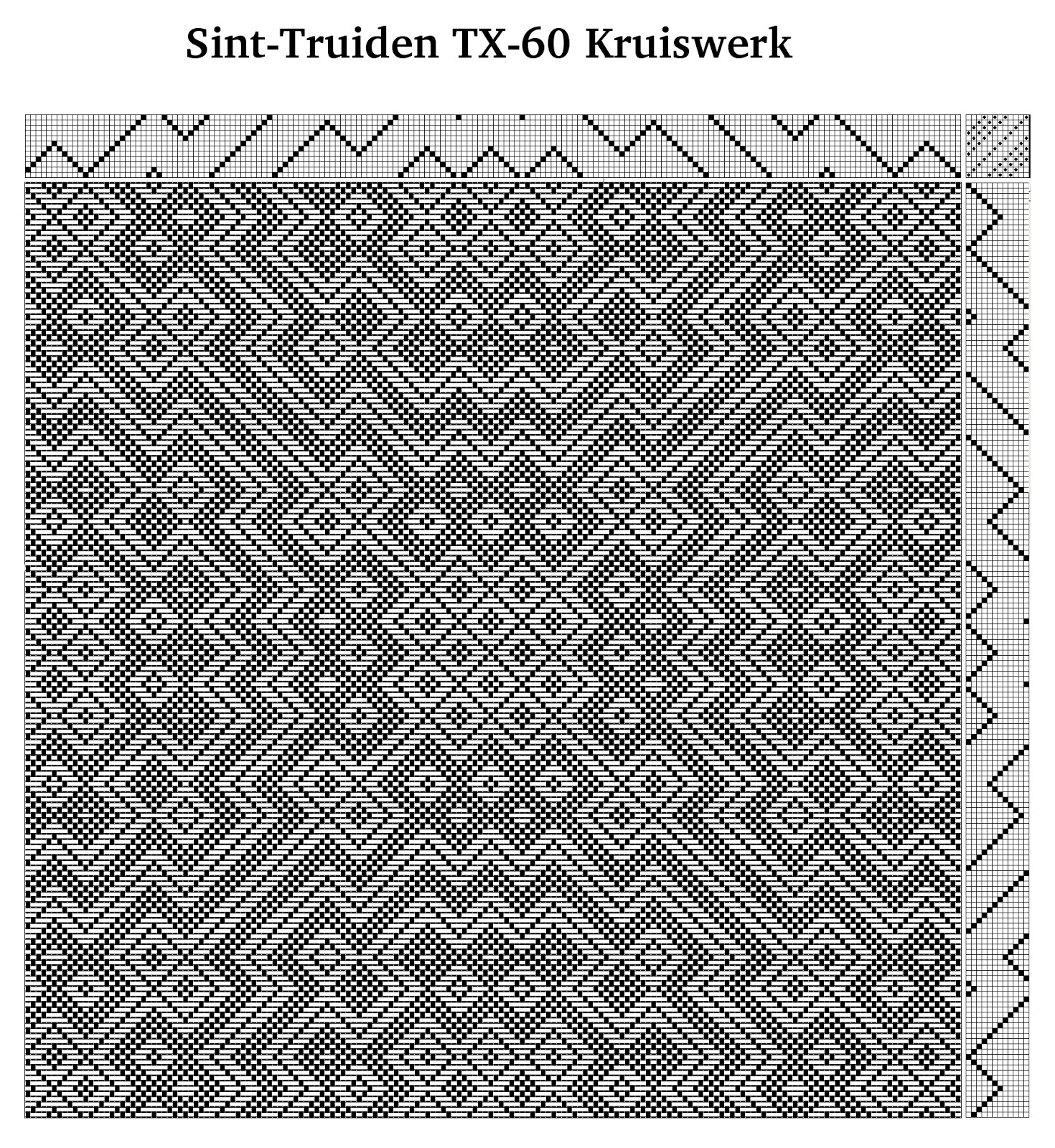 This particular kruiswerk is woven on 12 shafts.  Unlike the Earl of Mar piece, its twill floats are balanced by an expanse of tabby ground.  The original textile remnant is a complete loomwidth of between 64 and 65.8 cm in width and 21.5 cm in length.  It is woven of linen, possibly bleached, at 23 warps and 17 wefts per centimeter.  Each selvedge is reinforced with a single S-plied thread (Stof uit de Kist, pp. 268-270).

It is not clear to me yet where Six got the term kruiswerk, but his article suggests there's an early manuscript with drafts of this type of weave structure.  I am looking into this more deeply, as it would be so nice to be able to identify kruiswerk as the "cross work" of the London regulations.

Consitt, Frances.  The London Weavers' Company from the Twelfth Century to the Close of the Sixteenth Century.  Oxford: Clarendon Press, 1933.

This article was originally published in Issue 33 (September 2002) of Medieval Textiles, the newsletter of the medieval textiles study group of Complex Weavers.  The draft and drawdown I submitted were created using the freeware drafting program, WinWeave.  All my drafts were translated by the editor into better software for printing and publishing.  Due to the large size of the repeat, the draft was not printed in its entirety.  A separate drawdown was printed plus a draft of the complete threading plus the first half of the treadling.

Using GIMP, I have re-edited my original draft into a graphic for inclusion here.  I have chosen to reintegrate the threading, tie-up, treadling, and drawdown back into a single graphic.  The tie-up is for rising shed/countermarche.  Having it all appear as a single image gives a better idea of how the threading, tie-up, and treadling work together to produce the patterning.

This post was delayed by several weeks due to my being so inexperienced at editing graphics.  I had to cut and paste several different pieces of the original draft together into one big image, then hand-retouch a great many of the seams literally pixel by pixel.  Fortunately, though, I learned a whole lot by doing so!  Hopefully the next work won't take so long to produce.