"A Grass that Grows in Bologna": Dyeing with Weld


Written dyeing records from various parts of medieval Europe cite the use of several plants to achieve a yellow color: young fustic (Cotinus coggygria) and saffron (Crocus sativus) for warm shades; and weld (Reseda luteola), broom (Genista tinctoria), sawwort (Serratula tinctoria), trintanel (Daphne gnidium), and buckthorn (Rhamnus catharticus), also known as "Persian berries,"  for colder shades.  This article focuses on weld, perhaps the most accessible medieval yellow to the modern dyer.  It is cheap, quick and easy to grow, and safe and easy to dye with; the astonishingly vivid yellows it produces can also be overdyed in an array of interesting colors.

Weld gives a rubfast, fairly lightfast bright lemon-yellow dye that is slightly soluble in hot water (Colour Index, 3586), and it softens wools as it dyes them.  In Europe it was one of the most common commercially utilized dyestuffs from at least the early Middle Ages onward, and William Partridge notes its popularity in England in the early 19th century (Partridge, 106).  The earliest Western written recipes for weld come from the Mappae Clavicula, a Carolingian manuscript much copied in the early Middle Ages.  Therein are found several recipes for dyeing skins, leather, horn, and bone green using weld, usually cooked in urine and sometimes in tandem with other colorants.  There is a modern conceit that the term "Lincoln green," found in later medieval fictional literature, refers to a green dyed with woad over weld.  So far I have not traced any reference that leads to actual historic proof of this identification; most significantly, there seem to be no surviving later medieval recipes for dyeing cloth green from the area of Lincoln.  It is true that weld makes excellent greens.  Medieval recipes often call for it as the yellow component of greens, but they also call for other yellows to be used as substrates for greens.  Additionally, weld was used either by itself, in combination with a warm yellow such as fustic, or as a component in oranges, tans, and "quince" shades.

So far I have not been able to find a commercial source for weld as a dyestuff in North America.  The seeds, however, are readily available; I got my start with a packet from Richter's.  Since weld is easy to grow but hard to purchase, it makes a good choice for dye gardens.  It's a biennial weed, a low-growing rosette with a taproot that can tolerate a range of soil qualities and weather conditions.  Partridge actually warns that it produces less colorant when grown in good soil (Partridge, 111).  In the first season it only produces leaves; in the second season it bolts, producing at least one long shoot and several subsidiary shoots covered with tiny yellowish green flowers that become seed capsules.  This stalk is likely the source of one of weld's nicknames, "dyer's rocket," as it really does look kind of like a slender yellow-tipped rocket.  The huge numbers of tiny black seeds it produces guarantee that weld can readily take over any plot of ground upon which they fall.

I always start a spring crop of weld indoors using peat pellets.  After the danger of frost is past, they can be transplanted.  If there is a cold spell after the plants are outside, the plants might get confused and think they're in their second year of life.  If that happens, they'll bolt in the first year, which is a bonus!  If you want to force bolting in the first year, you could try setting seedlings in the refrigerator for a day or so before planting them outside.  After second-year plants have bolted (around midsummer), you can pull them up and re-plant the bed for a fall crop of leaves; the plants will bolt the following year.

Weld leaves can be cut and used at any time; I've even used frostbitten ones successfully.  However, in order to take advantage of the highest levels of colorants, it's a good idea to harvest the flowering shoots in the second year, as soon as the seed capsules have formed.  As the capsules ripen, the leaves turn yellow; ideally you should harvest while the leaves are still green. If you harvest after the seeds have fully ripened, be sure and save some for the next planting.

Medieval sources do not specify whether weld was used dry or fresh, although given the proportions involved in some of the recipes I believe it must have been dried.  Partridge also mentions that it was habitually pulled up and dried (Partridge, 110).   Weld leaves and seed capsules, which are all I save when I dry it, dry down to about one-quarter of their fresh weight.  I haven't had any luck using dried weld yet, but that's probably because I have only tried to do so in extremely small quantities.  Instead, I prefer to use weld fresh from my garden.

Medieval recipes for the use of weld usually call for alum as a mordanting agent.  A few mention lye (e.g., Titus D.XXIV) or urine (e.g., Mappae Clavicula), either by themselves or as an additional mordant; lye or lime is said to warm up the color (Brunello, 28).  However, I haven't been able to find any medieval recipes for weld over an alum and cream of tartar mordant.  All the yellow recipes I found that called for cream of tartar, even if they called for weld, also involved the use of fustic or sawwort.  Interestingly, I have found that my own experiments with weld over alum and tartar never come out as bright and clear as those using only weld over alum.  This fact also seems to hold true for all the other yellow-dyeing weeds I've used.  One of the apparent functions of cream of tartar as a mordant is to soften the hand of an alum-mordanted wool, which by itself can feel harsh.  Since weld naturally softens wools dyed with it (Partridge, 111f), cream of tartar may be safely omitted at least in weld dyeing.  Accordingly, I recommend that weld be mordanted with alum only rather than with alum plus tartar.

Spectrochemical analysis may have a contribution to make to this issue.  Two-dimensional thin-layer chromatography examinations of weld extract differ from those of weld-dyed wools that have been mordanted with alum and tartar.  Specifically, the luteolin 7-glucoside spot is much more faint in the profile of tartar-mordanted wool than in that of the weld extract (Andary et al., Figs. 5 and 6, p. 35), while the luteolin spots in the two samples are more similar in size and brightness.  I suspect that the presence of tartar may inhibit take-up of luteolin 7-glucoside.

The basic process for weld dyeing is simple: make weld soup, strain, and gently cook the yarn in the broth.  Although weld is not as notoriously sensitive to prolonged heating as many of the weed yellow dyes, nevertheless low heat always gets better results when working with weld.  The higher the heat, or the longer it lasts, the duller the result.  A potful of fresh weld (a pound or so of leaves) will extract very nicely in about an hour of simmering time, and it never takes me more than about 15 minutes to exhaust the bath.  Often as little as five minutes of dyeing time suffices.

Here's a tested recipe utilizing the quantity of weld you can easily grow in a smallish plot, say, 8-12 plants.  With this recipe you'll get very saturated yellows, like those at the bottom of the sample card.  Using the proportions of three parts weld to one part wool, or by including the stalks in your pound of weld, you'll get lighter yellows, more like those at the top of the sample card.


Dissolve the alum in a potful of blood-warm water.  Add the thoroughly wetted yarn; slowly raise heat and maintain it below a boil until the yarn has been in the pot for two hours.  Let cool in the pot five hours.  Remove, wring, and dry without rinsing.

Cover weld with warm water.  Heat and simmer gently until the weld has been in the pot for one hour.  Strain out the weld and put the dyebath back into the pot.  It will be fairly light in color, with a greenish cast.

Rinse the mordanted yarn well and add to the dyebath.  Maintain a hot temperature in the dyebath but do not permit it to simmer hard.  Stir a few times and check the yarn in five minutes.  If there is still color in the dyepot, stir and leave for another five minutes, repeating if necessary.  After 15 minutes, the dyepot should be exhausted; if not, proceed until it is.

Weld can be overdyed to a number of orange and green shades using madder and woad or indigo; see the sample card for an assortment of shades.  Or you can simply stop at yellow.  You can level your dye job with Synthrapol, as desired.  However, heating weld-dyed yarn in water will remove some of the color, whether you're overdyeing with a hot bath or leveling.  In my opinion, it's worth the slight loss of saturation to level weld-dyed yarns.  Once your yarn is leveled, though, don't ever wash it again in hot water. 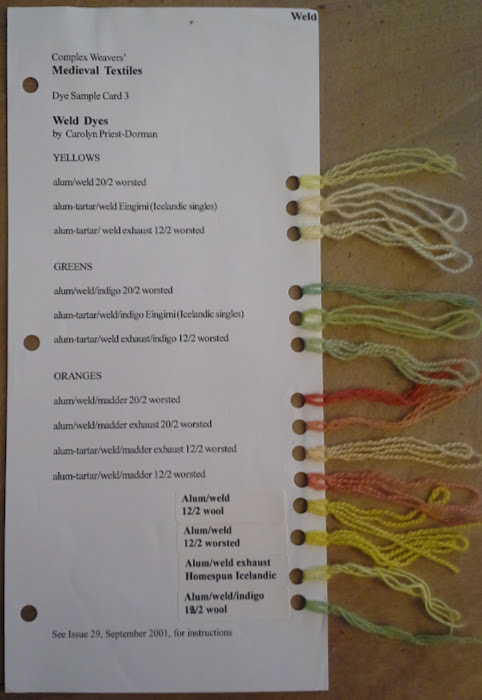 Cardon, Dominique.  "Yellow Dyes of Historical Importance: Beginnings of a Long-Term Multi-Disciplinary Study; Part I, Yellow dye-plants in the technical and commercial literature from Southern Eruope: Italian, French and Spanish sources of the 13th-18th centuries."  Dyes in History and Archaeology, no. 13 (1994), pp. 59-73.

Liles, J.N.  The Art and Craft of Natural Dyeing: Traditional Recipes for Modern Use.  Knoxville: University of Tennessee Press, 1990.

Partridge, William.  A Practical Treatise on Dying of Woollen, Cotton, and Skein Silk with the Manufacture of Broadcloth and Cassimere Including the Most Improved Methods in the West of England, reprinted with an introduction by J. de L. Mann and technical notes by K.G. Ponting.  Edington, Wiltshire: Pasold Research Fund Ltd., 1973 [1823].

Rosetti, Gioanventura.  The Plictho of Gioanventura Rosetti: Instructions in the Art of the Dyers which Teaches the Dyeing of Woolen Cloths, Linens, Cottons, and Silk by the Great Art as Well as by the Common, trans. Sidney M. Edelstein and Hector C. Borghetty.  Cambridge, Mass.:  The M.I.T. Press, 1969 [1548].

This article was originally published in Issue 29 (September 2001) of Medieval Textiles, the newsletter of the medieval textiles study group of Complex Weavers.  It was part of a theme issue on medieval dyestuffs that included several sample cards.  I have photographed my sample contributions and added the image to the document for posting here.

This early work with weld became the seed of a research project that I wrote up for delivery at the Colour Congress 2002:  The Art, History, and Use of Natural Dyes, an international conference on natural dyes and dyeing held at Iowa State University on 19-21 May 2002.  You can download that revised and greatly expanded paper here.