The samples in my set are all commercial yarns.  The Icelandic wool single is "eingirni," imported from Iceland by Louise Heite in the late 1990s; it makes good hats and pouches.  The Persian wool is from Robin & Russ, where it is available in one-pound hanks of six-strand yarn; I unplied the last stage of plying to make a two-ply wool yarn for coarse Bayeux Tapestry-style embroidery.  The 12/2 wool was a closeout from Webs several years ago that I use for experimenting with new dyestuffs or recipes.  The silk organzine (a plied, reeled silk) is from HaBu Textles and is destined for tablet weaving. 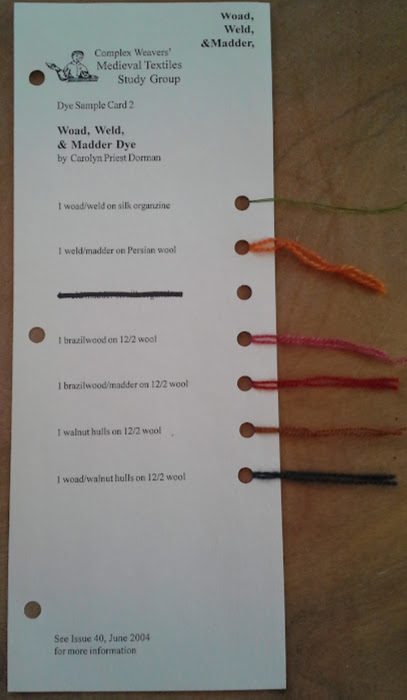 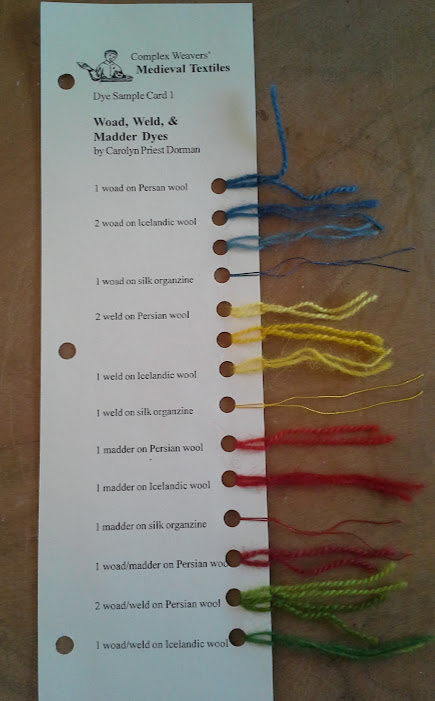 The woad is from Bleus de Lectoure in France; nowadays it is carried by Carol Leigh's Hillcreek Fiber Studio.  The madder came from Earth Guild; I buy it in root form and process it myself.  The brazilwood came from Aurora Silks.  The weld is from my back yard.  The walnut hulls were harvested from the playground at my daughter's school.

I always cold-mordant my silks, based on the recommendations in the Plictho and several other early dye compendia.  My wools are mordanted in a simmer-and-soak procedure adapted from Jim Liles.

None of the woad was pre-mordanted.  For the woad vat I use a recipe adapted from Gayle Bingham's article in Issue 29.

All the weld is mordanted with alum; my current weld recipes are refinements of the one presented in my article in Issue 29.


The walnut hulls were harvested green.  I let them stand in a stainless container about three weeks, until they were good and decayed, then removed them from the nuts and made a very dark brown decoction from them.  (The local squirrels were thrilled to eat all the leftover nuts, even in their fermented state.)  The resulting dye vat is very strong.  I let some of it sit until it had completely dried, which gave me nice dry chips of walnut concentrate-easy to store and to reconstitute.  Next season I'll experiment more with this technique.

Liles, J.N.  The Art and Craft of Natural Dyeing:  Traditional Recipes for Modern Use.  Knoxville:  The University of Tennessee Press, 1990.

Rosetti, Gioanventura.  The Plictho of Gioanventura Rosetti: Instructions in the Art of the Dyers which Teaches the Dyeing of Woolen Cloths, Linens, Cottons, and Silk by the Great Art as Well as by the Common, trans. Sidney M. Edelstein and Hector C. Borghetty.  Cambridge, Mass.: The M.I.T. Press, 1969.

This article was originally published in Issue 40 (June 2004) of Medieval Textiles, the newsletter of the medieval textiles study group of Complex Weavers.  It was part of a theme issue on medieval dyestuffs that included several sample cards.  I have photographed my sample contributions and added the images to the document for posting here.

Gayle Bingham's recipe for dyeing blue using the Bleus de Lectoure woad can be found in this reprint.