A while back, a private book collector in the Midwest sent me a textile to examine.  It had come to him as a bookmark in a sixteenth-century bound manuscript.  With his permission, I am sharing my analysis here.

The bookmark is what's known as a "portable register" type.  Rather than being attached to the binding or a page of the book, it is removable.  Specifically, it's a multiple-strand bar anchor bookmark.  Several textile strips are secured to a bar (the "anchor") that is designed to rest on or at the top of a book.  See this article for an introduction to medieval bookmarks, and see the sources at the bottom of this post for more information.

This bookmark is composed of what appears to be a hand-whittled wooden bar anchor around which are sewn five lengths of band-woven textile.  The strands vary in condition from bright, flat, and flexible to crusty, dirty, curled, and stiff.  Only one of the ends has any finishing treatment; most are quite ragged and torn. 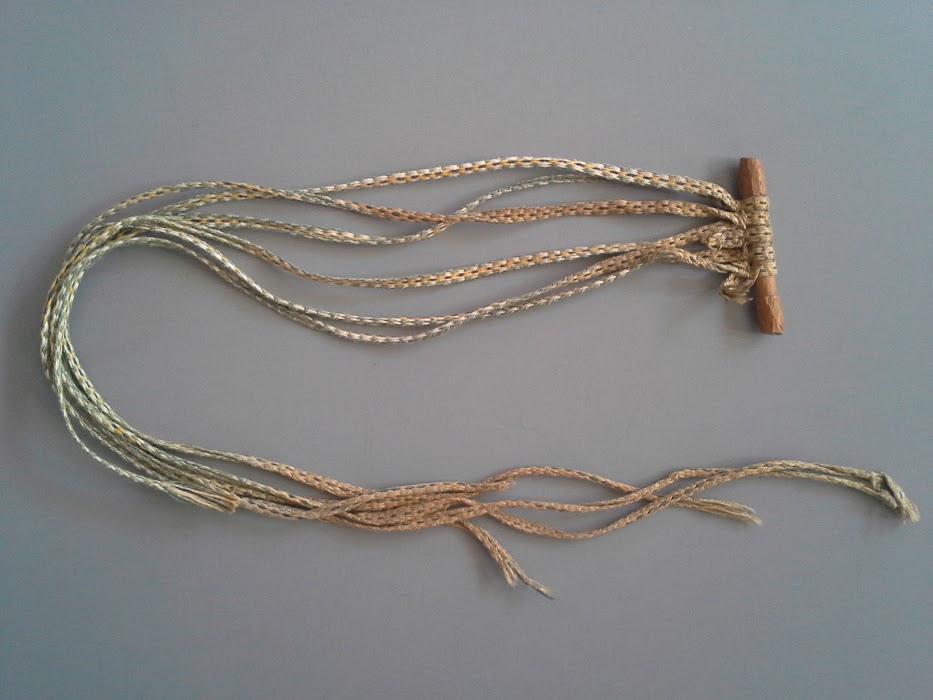 The anchor is is about 2-1/4" (56mm) long by 1/4" (6mm) at its widest diameter.  The carved away portion of the bar is about 1-1/4" (32mm) long.  The wood is a light-colored, fine-grained hardwood, slightly bowed along its length.  Wear has chipped and pitted the surface at the two ends, which were originally smooth.  The collars at either side of the carved away area are still sharply cut into the wood, as if by a small but very sharp knife.

The five individual lengths of band-woven textile have been looped around the anchor for an original count of ten hanging tails, the strands.  A line of coarse stitching worked with a naturally colored linen thread holds together the entire set of looped bands.  The sewing thread is wrapped several times around each of the two outside bands. 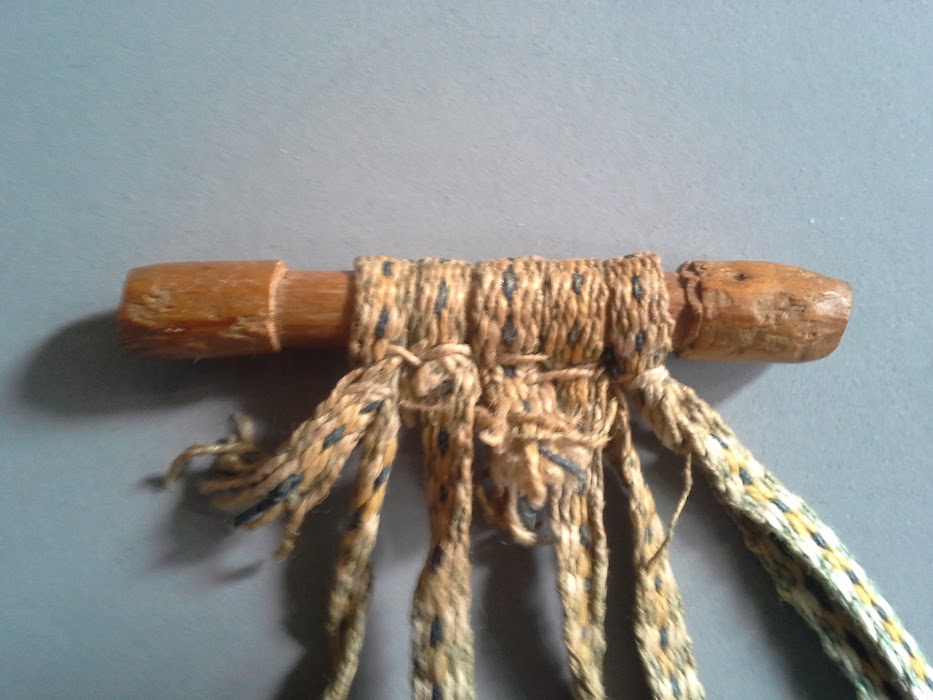 Six of the original ten strands survive in a usable length.  Both sides of the middle strand have been torn away leaving nothing but frayed ends next to the anchor.  One entire side of each of two strands has also been torn away, again leaving frayed ends next to the peg.  Two strands are substantially complete although one end of each is shorter than the other end; both the shorter ends are also frayed.

The two longest remaining ends are approximately 22" long.  One terminates in an overhand knot.  The other has some broken warps and comes to what looks like a blind end.  It may be that these 22" lengths reflect the original lengths of the strips.  The book in which the bookmark was found is about 12.5" tall, which corresponds to the area of each long length that is comparatively clean and bright in appearance.

The textiles appear to be five strips cut from a single long narrow band.  The band is of warp-faced tabby, i.e., either rigid heddle or inkle woven.  The warp is two-ply linen of approximately 0.4-0.5mm diameter.  The band varies between 4mm and 5mm in width, and the beat is very regular.

The eleven warp ends are in four colors—bleached, golden yellow, light greenish blue, and dark blue—and the weft is more of the light blue linen.   The blue threads are finer than the gold and white ones.

There doesn't seem to be a good solid hook from which to hang a specific date on this bookmark.  There is no reason to assume it was necessarily as old as the manuscript.  While some portable register bookmarks found in medieval books are likely to have been original (Swales & Blatt 2007, 167), others are not.  This bookmark could easily have been an afterthought, added to the book centuries after it was bound.  Perhaps someone retrofitted an existing anchor by giving it new textile strands in a later century.  Or perhaps the present bookmark might have completely replaced an earlier marker whose anchor was in poor repair but whose existence was helpful.

Although some parts of it are worn and dirty, proving that it's been around for a while, the linen for the most part is in extremely good shape, supple and not deteriorating.  It is hard to imagine linen strands would be in that fine a shape after hundreds of years closed between two layers of vellum; over so long a period of time surely the pH of the vellum would prove damaging to the linen.  Also, the use of several colors in the linen tape is, as nearly as I am aware, more likely to be a product of the eighteenth or nineteenth century than of the sixteenth or seventeenth.  I could not find any examples in Swales & Blatt's catalogue that were even remotely similar to this one save #2, "plain-woven red/blue/white wool and linen tape," which the authors could not examine (Swales & Blatt 2007, 148).  A mixed wool and linen tape seems even less likely to date back that far than the one at hand.

Accordingly, I'm going to hazard a guess that the textile portions of this bookmark are nineteenth century, at the earliest.  About the anchor, I've no idea, but it seems to have been fairly amateurishly produced, perhaps by someone bookish who needed a replacement anchor for a special book.

I appreciate the opportunity to have examined this piece as well as the challenge it posed to my knowledge of historic bookmarks.  I learned a lot!

I created the weaving draft to match the original colors using KXStitch* and the Anchor color palette.  The exact Anchor colors I used for this draft are as follows.


* KXStitch is an open source cross-stitch graphing program for KDE.  It comes pre-loaded with the Anchor, DMC, and Madeira color palettes.  When using KXStitch for graphing textile patterns, I habitually use the Anchor palette rather than the DMC or Madeira one; I find it better represents naturally dyed textile colors, which are the colors I am accustomed to using.